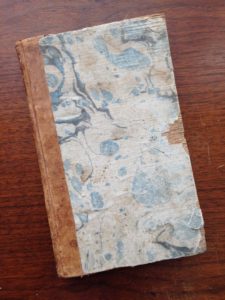 I collect books. Not surprising for an author, I know, but the books I collect aren’t on most wish lists.

I only collect certain antique textbooks. My favorites are pre-1860 American schoolbooks because I imagine these books could have been taken to the Land with the founders in my Uncharted series. Good condition is a plus, but I love little notes and doodles by students. I also find fading, foxing, and crackly pages charming. 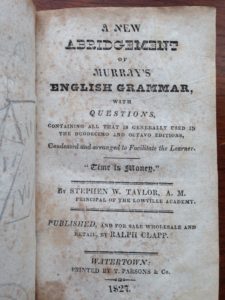 Title page of A New Abridgement Of Murray’s English Grammar

Since this hobby is strongly linked to my fiction series, I decided to feature some of these wonderful old schoolbooks. I refer to them in my stories and sometimes show a character reading or holding one. Today I present an 1827 copy of A New Abridgement Of Murray’s English Grammar. The actual title is: A New Abridgement Of Murray’s English Grammar, with questions, containing all that is generally used in the duodecimo and octavo editions, condensed and arranged to facilitate the learner. 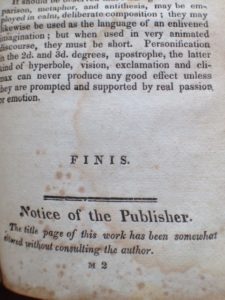 The author, Lindley Murray, died in 1826, so it’s understandable the publisher didn’t consult him on the alteration.

Lindley Murray was an American Quaker born at Swatara, Pennsylvania in 1745. After the American Revolution, he moved to England where he wrote many prominent textbooks, including Murray’s English Grammar.
According to the now public domain article[1] by Charlotte Fell Smith (1894): His attention was… drawn to the want of suitable lesson-books for a Friends’ school for girls in York, and in 1795 he published his ‘English Grammar.’ The manuscript petition from the teachers requesting him to prepare it has been religiously preserved. The work became rapidly popular; it went through nearly fifty editions, was edited, abridged, simplified, and enlarged in England and America, and for a long time was used in schools to the exclusion of all other grammar-books. 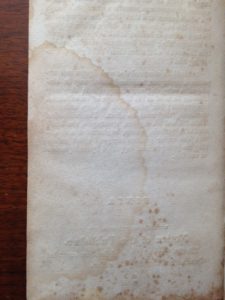 You can see and feel the press marks in the paper. Love the old process!

Lindley was married 57 years and had no children. He wrote and published 11 textbooks. Hundreds of thousands of copies of his books were used in schools around the world. Through his books, he taught more children than most of us ever will.