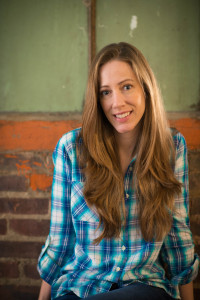 Born in St. Joseph, Missouri, Keely was a tree-climbing, baseball-loving 80s kid. She grew up in a family who moved often, which fueled her dreams of faraway lands. When she isn’t writing, Keely enjoys teaching home school lessons and playing bass guitar. Keely, her husband, and their daughter live on a hilltop south of Nashville, Tennessee.

Where did the idea for the Uncharted series come  from?

The books in Keely’s Uncharted series are known for their mix of historical fiction, science fiction, and romance. Her desire to write unique stories started long ago. As a child, Keely papered her bedroom walls with maps out of National Geographic Magazine. She often stared at the wide blue swaths of ocean on the maps and wondered if a land existed that no one knew about.

While researching her family history as an adult, Keely became fascinated by the group migrations to the American West. She wondered what would happen if instead of going west, a group of families left the United States on a ship, got lost at sea, and ended up on that hidden land. She wrote the idea and put the story aside to continue her family research.

Then in 2013, her husband, Marty, challenged her to write the book. She accepted his challenge and looked over her story notes. That’s when she decided to start the series a few years in the future (2025), have the rest of the world embroiled in World War III, and drop a modern navy pilot into the Land to show the cultural contrast.

After The Land Uncharted came out, Keely wrote stories telling the history of the Land. The 3-book Uncharted Beginnings series follows the Land’s founders as they arrive in the Land and establish what is now a fascinating culture.

Keely plans to continue writing stories in the Land and publishing books in the Uncharted series. Add your email address to Keely’s List to be among the first to know when her next book is available. Click here to sign up using the secure form.