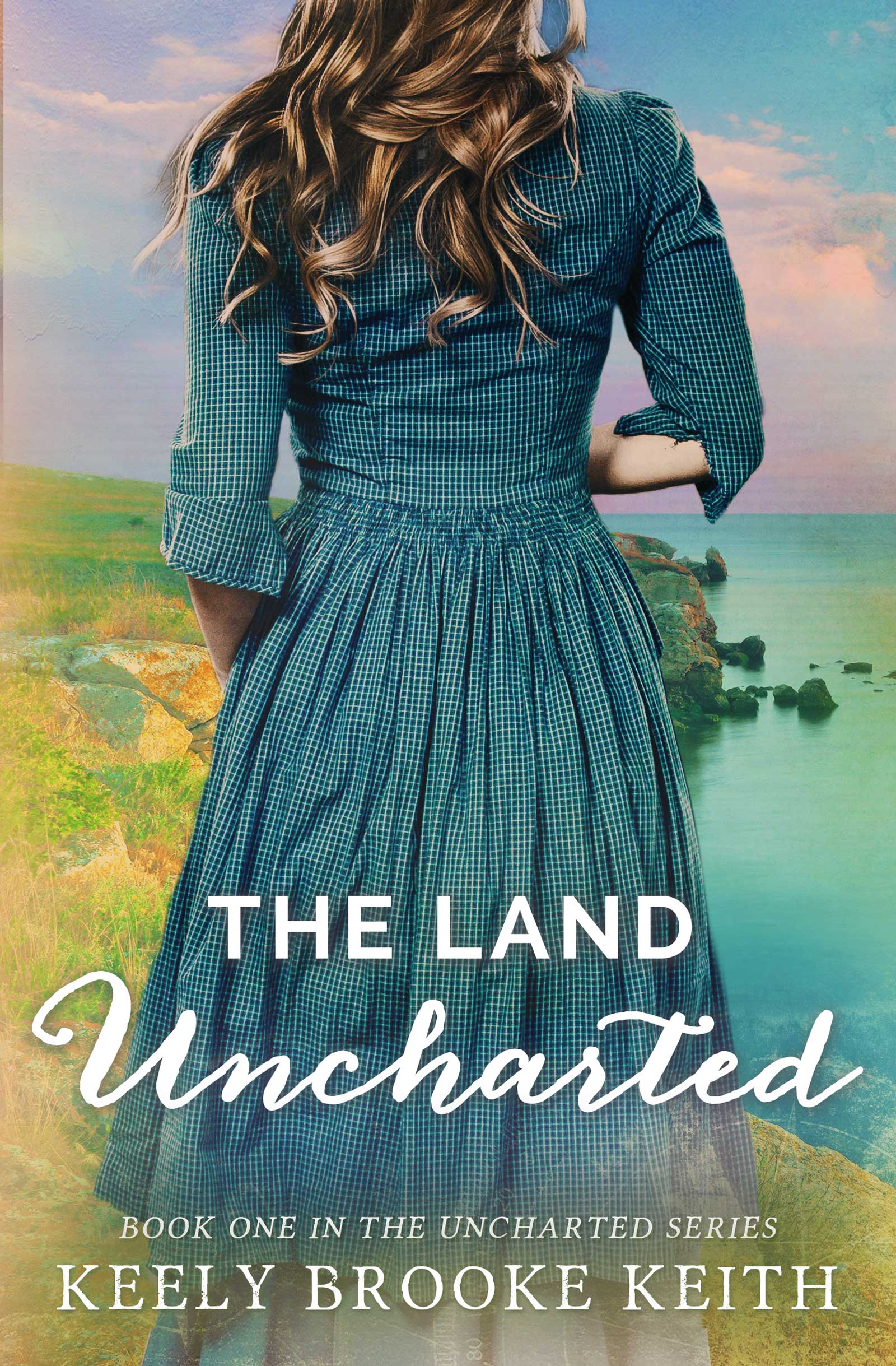 Lydia Colburn is a young physician dedicated to serving her village in the Land, an undetectable island in the South Atlantic Ocean. When Lt. Connor Bradshaw’s parachute carries him from the war engulfing the 2025 world to Lydia’s hidden land, his mission could expose her simple society. As Connor searches for a way to return to his squadron, his fascination with life in the Land makes him protective of Lydia and her peaceful homeland, and Lydia’s attraction to Connor stirs desires she never anticipated. But will they be able to keep the Land hidden?

The Land Uncharted is available now in paperback, ebook, and audiobook

Lydia Colburn refused to allow a child to bleed to death. Pulling a sprig of gray tree leaves out of her wind-whipped hair, she rushed inside the farmhouse and found the injured boy sprawled across the bed exactly as Mr. McIntosh had said she would. She dropped her medical bag on the floor beside Mrs. McIntosh, who was holding a blood-soaked rag against young Matthew’s lower leg.

Lydia touched Matthew; his skin felt clammy and his breath came in rapid spurts. “He’s still losing blood. Get the pillows out from under his head.” She slid her hands beneath his fractured limb and gently lifted it away from the mattress. “Put them here under his leg.”

Mrs. McIntosh’s thin hands shook as she moved the pillows. “I gave him tea from the gray leaf tree as soon as his father brought him in the house.” Her voice cracked. “I know he doesn’t feel the pain now, but it hurts me just to look at him.”

“You did the right thing.” Lydia maintained her professional tone as she opened her bag and selected several medical instruments. She peeled back the bloody rag, revealing the fractured bone. Its crisp, white edges protruded through his torn skin. “You’re going to be all right, Matthew. Do you feel any pain?”

“No, but it feels weird. I don’t like it.” His chin quivered as he spoke. He stared at his mother with swollen eyes.

Mrs. McIntosh drew her lips into her mouth as she fought the urge to cry. Her hand passed over his head with rigid strokes. “You’re going to be fine, Matthew. Miss Colburn will fix it.”

When Lydia put her hands on the boy’s leg, he recoiled and screamed. It was not from pain but from terror. With his fractured leg tucked close to his body, Matthew buried his face into the ribbing of his mother’s dress. Lydia gave Mrs. McIntosh a chance to muster her courage and make her son cooperate, but instead she coddled him. Though Lydia appreciated a nurturing mother, this was no time to help a child hide his wound. “Your mother is right. You’re going to be just fine.” She reached for his leg again. “You don’t have to look at me, but you must leave your leg on the pillow. Matthew? Let me straighten your leg.”

Mrs. McIntosh glared at the bloody wound and then began to weep. “Oh, Matt, I’m so sorry. My poor baby!”

“Mrs. McIntosh?” Lydia raised her voice over the woman’s sobs. “Mrs. McIntosh? Rebecca! I know this is hard, but please, be calm for Matthew’s sake. I need you to help me. Can you do that?”

“I need more light. Do you have another lamp in the house?”

“Yes, of course.” Mrs. McIntosh wiped her nose on her sleeve and scurried out of the room.

Relieved that Mrs. McIntosh was gone, Lydia caught the boy’s eye. She touched his foot with both hands. “Matthew, you must lie still while I work on your leg. You won’t feel any pain since you were a good boy and drank the gray leaf tea your mother made, but now you have to be brave for me and hold still. All right?” She was prepared to hold him down but loathed the thought. Matthew seemed to understand her seriousness and allowed her to move his broken leg back onto the pillow. She worked quickly and methodically until the bleeding was under control. She cleaned his flesh with gray leaf oil, then looked into the open wound and aligned the bone.

Mrs. McIntosh’s footsteps echoed in the hallway, but Lydia was not ready for the anxious mother’s return. “Please, bring some cold water and a few clean rags first. I need them more than I need the extra light.” Lydia gave her voice enough volume for Mrs. McIntosh to hear her without entering the room.

She glanced at her patient’s face as she continued to work. His eyes were clenched shut. Her heart ached for the pallid and broken boy. “I heard you had a birthday recently, Matthew. How old are you now? Fifteen? Sixteen?”

Matthew opened his eyes but stared at the ceiling. “I’m seven,” he slurred through missing teeth. His respiration had settled; the gray leaf’s healing power was beginning to take effect.

“Ah, I see you’ve lost another baby tooth.” She cut a piece of silk thread for suture and kept the needle out of his sight while she threaded it. “Soon you will have handsome new adult teeth.”

Matthew closed his eyes again and lay still. Mrs. McIntosh walked back into the room with a pitcher of water in her hands and a wad of kitchen towels tucked under her elbow. She set the water jug on the floor beside Lydia’s feet and bundled the rags on the bed. “Is that enough?”

“I’ll be right back with the lamp.” Mrs. McIntosh vanished from the room again.

Lydia covered the stitches with a thick layer of gray leaf salve. As she wrapped his leg loosely with clean muslin, she heard Mr. McIntosh enter the house. Mrs. McIntosh spoke to her husband in a hushed tone then walked into the room holding a lit oil lamp.

Mrs. McIntosh sighed. “Oh, thank heavens you’re done.” She set the lamp on a doily-covered table beside the bed then sat on the edge of the mattress beside Matthew. “He’s asleep,” she whispered.

Lydia slathered her hands with the disinfecting gray leaf oil then wiped them on a clean rag. As she gathered her medical instruments, Mr. McIntosh stepped into the room.

He cleared his throat. “Is there anything I can do?”

Lydia glanced at Mr. McIntosh. “I need a couple thin pieces of wood to splint his leg, if you don’t mind.”

Mr. McIntosh nodded and left the house. A moment later, he returned with two flat, wooden shingles. Lydia used them to splint Matthew’s leg, then she began to clean and pack her instruments. As she worked, she gave Mr. and Mrs. McIntosh instructions for bandaging and cleaning his leg. Then she handed Mrs. McIntosh a jar of gray leaf salve. “Use this twice a day on the wound. With rest and proper use of the medicine he should heal completely in a few days.”

Lydia followed Mr. and Mrs. McIntosh out to the porch. Stars crowded the clear sky and crickets’ intermittent chirps pierced the cool night air. Lydia’s horse snorted as Mr. McIntosh gathered the reins and walked it to her.

“Thank you, Lydia.” Mrs. McIntosh fanned her face with her hands.

Mr. McIntosh removed his wide-brimmed hat and wiped his brow with a cotton handkerchief. “It seems too dangerous of a job for a woman—taking the forest path alone at night like you did to get here.” He put his hat back on his head and dabbed at the sweat on his neck. “I’m grateful you got here in time to save my boy, no doubt about it, but the way you rushed down the forest path instead of taking the main road scared me. Granted you beat me back here by twenty minutes, but still it’s too dangerous at night to—”

“The cover of darkness does not mean I’m released from duty.” She stepped around Mr. McIntosh and strapped her medical bag to the saddle.

He nodded then handed her the reins. “That’ll be the last time Matthew climbs to the roof of the barn.”

“Yes. Please see to it.” She smiled and tucked a loose strand of hair behind her ear.

“I heard your family will be gathering tomorrow night to celebrate Isabella’s seventy-fifth birthday. How about I deliver a lamb roast as your payment?”

“That sounds fine. I’ll tell my father to expect you.” She mounted her horse. “I know Aunt Isabella will be glad to have roast lamb at her party.”

“A lamb it is. Thank you, Miss Colburn. Oh, and do take the road back to the village. I’d never forgive myself if something happened to you on your way home.”

The Land Uncharted is available now in paperback, ebook, and audiobook